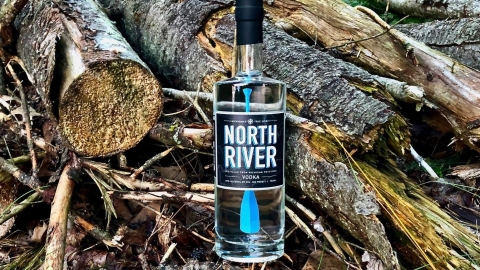 KALKASKA, Michigan – A vodka made from potatoes grown in Kalkaska has earned a prestigious award at an international tasting competition.

North River Vodka, which is produced from potatoes grown by Iott Seed Farms in Kalkaska and is owned by Kalkaska natives Chris and Amanda Iott, was awarded a silver medal by the American Distilling Institute in its 2022 International Spirits Competition. The results of the annual competition were released today.

“There are a lot of spirits competitions out there,” Chris Iott said. “The American Distilling Institute competition is the best. It’s the only one we’ve entered. We are proud of our product and couldn’t be more excited to earn an award and so many positive comments from the ADI judges.”

North River Vodka was tasted and evaluated blind by four expert spirit judges, who scored the vodka. The panel’s anchor judge then tallied the score to begin a discussion on what medal, if any, should be awarded. The ADI doesn’t specify how many medals of each type should be awarded so that all medals “are earned solely based on the quality of the spirit in the glass.”

The vodka was entered in the “vodka: residual base character” category. Judges’ comments included the following:

• "Approachable nose. Soft and slow progression down the palate with a subtle spice."

“Most vodkas are filtered to the point that they just taste like, well, alcohol,” Amanda Iott said. “We don’t filter the life out of our vodka, and the feedback from the judges reflects that. North River Vodka retains some of the character from the potatoes, which means it has a bit of sweet earthiness to it. It’s great in a ton of different drinks, including Bloody Marys and mules, or even just over ice with a few drops of sweetened lime juice in it.”

North River Vodka launched in October 2018 in Jackson, where Chris and Amanda Iott live, and was available only at Grand River Brewery until October 2019, when it went into statewide distribution. It is distilled in Traverse City through a partnership with Grand Traverse Distillery. Chris Iott grew up on Iott Seed Farms and worked there from the time he was a child until he graduated from college. The farm is currently owned and operated by his two brothers, Dennis Iott and Greg Iott, and their nephew, Bryan Fischer.

“We really claim three hometowns for our vodka due to our ties to Kalkaska, Jackson and Traverse City,” Chris Iott said. “But Kalkaska is special to us. It’s where Amanda and I grew up and where we met. The vodka is inspired by both the farm and the property on the Manistee River that belonged to my late father, Ralph Iott. ‘The River’ will always be a special place to the entire family, and this vodka is special to us.”

North River Vodka is available in about 100 stores, restaurants and bars in Michigan. It is available in all seven Mega-Bev locations across the state, all seven Polly’s Country Markets locations, four Total Wine and More stores, three urban-based Meijer neighborhood market stores and all five of Grand Traverse Distillery’s tasting rooms.